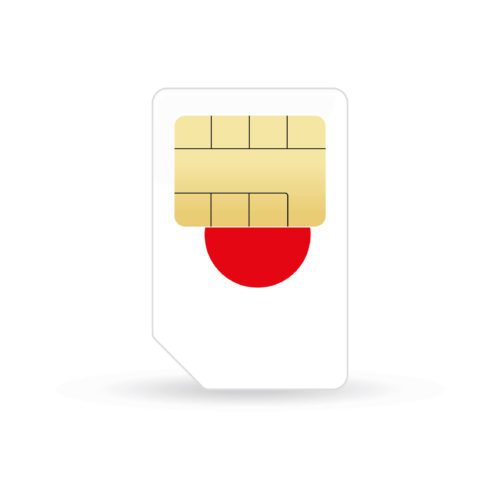 With this Japan pay-as-you-go sim card you can be called and texted in Japan without any cost for you.

Recieving calls and texts is free of charge. 10 Euro starting credit for active calls, texts, or data. These services cost (see rates below) and are deducted from the starting credit balance.

Once you have used up the 10 Euro credit, you can easily refill your balance online. All is described in detail in the manual that comes with the sim card. You control your telecommunication cost abroad yourself as you cannot spend more than you have on this sim or than you have refilled.

This Japan pay-as-you-go sim card has a good coverage in Japan.

This sim card has a British phone number. That means, the caller pays the rates according to his/her telecom contract for a call to a UK cell phone.

Besides Japan, this sim card is useful in all countries abroad. You can use it in all countries, and rates are usually much cheaper than your home mobile contract. In 95 countries you can receive calls and texts for free. Rates different per country.

Thi sim card and the phone number remains active for a year after last usage (also without recharging the sim card). You can use it on your next trips abroad.

Evaluation beachSIM.com Team for this Japan pay-as-you-go sim card:
„We recommend this prepaid sim card for being accessible by phone  and to use internet once needed. For use in a mifi/router and pure internet usage the rates are to expensive.“

We wish a an eventful and successful trip to Japan with this Japan pay-as-you-go sim card!